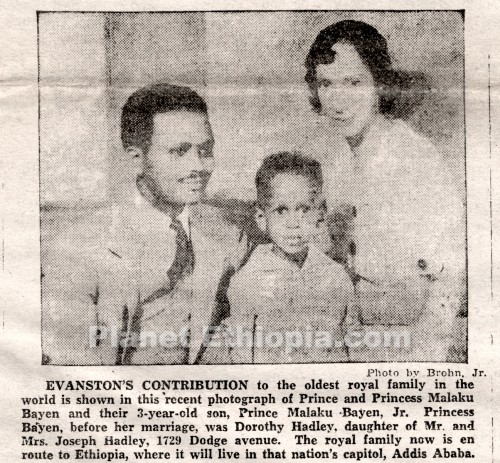 Melaku E. Bayen 1892-1932E.C. (1900-1940)
The First Ethiopian Physician trained in the U.S. and Political activist during Italo-Ethiopian Conflict was born on April 27, 1900, in Wello Province in central Ethiopia. He is the son of Grazmach Bayen and Woyzero (Mrs.) Desta. His parents move to Harar, when he was a baby. The young Melaku was raised and educated in the compound of Ras (General) Mekonnen, then the Governor of Harar and the father of Lij Tafari, the future Emperor Haile Selassie. In accordance with the aristocracy's custom of educating and training likely young boys for positions of leadership, young Melaku was placed under the tutelage of Lij Tafari and taught by priests, attached to Ras Mekonnen’s royal court. Melaku lived close to the future king, serving as both his page and personal attendant in the royal courts of Harar and later of Addis Ababa at least for a decade.
Life in the royal court taught young Melaku strict discipline and gracious protocol. On January 19, 1921 Melaku was sent to India along with two young men and a woman for preparatory studies under private tutors from Great Britain.
The sudden death of the young woman left Melaku and his compatriots devastated, hence making their stay in India unbearable. So they appealed to Ras Tafari to permit them to pursue their studies in the United States, where imperialistic designs on Africa seemed absent. The students' request was granted.
In the company of an American missionary to Ethiopia, Melaku set sail with Worku Gobena and Beshawered Habteweld for the U.S. Upon their arrival in 1922, the young Ethiopians had with them a sealed envelope containing a personal letter of recommendation to President Warren G. Harding from Ras Tafari, heir apparent to the Ethiopian throne. The Ethiopian Regent addressed a courteous and yet forceful letter to President Harding that emphasized the great need for educated Ethiopians. Because of their impressive credentials from the Ethiopian regent, the trio was permitted to meet Mr. Harding, who urged the Africans to enroll at Marietta College in Southeast Ohio. Melaku finished the prep school in 1925 and that fall Melaku entered Muskingum College near Columbus, Ohio. He graduated from that institution just three years later, becoming one of the first Ethiopians to earn an American degree.

In 1928 Bayen enrolled at Ohio State University in Columbus as a graduate student of chemistry. A year later, he was admitted to the Medical School at Howard University, one of the nation's most prestigious black educational institutions.

Melaku attended the coronation of Emperor Haile Selassie on November 2, 1930 in Addis Ababa and traveled back and forth many times accompanying African American recruits for various jobs and briefing the new Emperor on the situation in the United States. At Howard, he co-founded the Ethiopian Research Council in 1930 with
Professor Leo Hansberry, one of the pioneers of African studies in the United States. The Council was regarded as the principal link between Ethiopians and African Americans particularly in the early years of the Italo-Ethiopian conflict. After the Italian invasion of Ethiopia, Melaku focused less upon recruiting skilled Afro-Americans for service in Ethiopia and more on mobilizing black American support for his country.

After graduating from Howard medical school in June 1935, Dr. Melaku had originally intended to remain in the U.S. to complete his internship, but the serious situation in Ethiopia caused the Emperor to recall him. Thus, on July 10, 1935, the physician departed for Ethiopia with his wife, Dorothy, and young son, Melaku Jr.

There, Dr. Melaku's duties at the American Mission Hospital in the capital and later with the Ethiopian Red Cross in the Ogaden, brought him into intimate contact with the war.
Meanwhile, the war went badly for the Ethiopians. When it became clear in late April 1936 that it was senseless to attempt to defend the capital, members of the Imperial Council persuaded the Emperor to leave the country for Geneva to make a final appeal to the League of Nations for support. When the Italian Army captured Addis Ababa, Melaku’s family went to England and later to the United States to fully campaign for Ethiopia. Melaku and his wife Dorothy Hadley, created a newspaper called Voice of Ethiopia to simultaneously denounce Jim Crow in America and fascist invasion in Ethiopia.
News of Ethiopia’s plight fueled indignation and furious debates among African Americans. In Harlem, Chicago, and various other cities African American churches urged their members to speak out against the invasion. Melaku established at least 28 branches of Ethiopian World Federation, an organ of resistance calling on Ethiopians and friends of Ethiopia throughout the United States, Europe, and the Caribbean. Touched by the Emperor’s speech at the League of Nations, and Melaku’s impassioned message, blacks vowed to support Ethiopia. Melaku Beyan and his African American counterparts remained undeterred for the remainder of Ethiopia’s struggle against colonization. In 1940, a year before Ethiopia’s victory against Italy, Melaku Beyan succumbed to pneumonia, which he had caught while walking door-to-door in the peak of winter, speaking boldly about the war for freedom in Ethiopia.

Uploaded to Ethiopian Scholars — 5 years ago