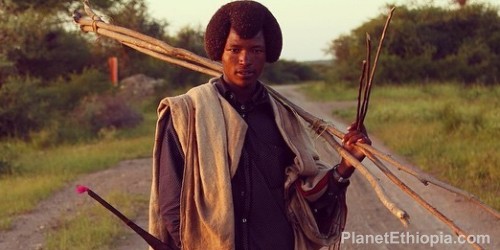 The Karayu are among the last Oromo – with Borena and the Guji Kamise – to maintain their pastoral lifestyle . As such, they are considered by many Oromo as guardians of traditional culture.
Traditional religion is Karayu waaqeffata , a monotheistic religion based on a belief in a supreme being called Waaqa . This religion is closely linked to nature. The Oromo and the Waaqa pray in sacred sites such as lakes, water points, the peaks of some mountains but also with specific tree species, such as odaa without making animists .
The Karayu also participate in the gada system , an African form of ancient and complex democracy , based on generational groups that alternate power every eight years . A gada cycle lasts 40 years. The gada is not only a political system but also a social institution that governs the life of the Oromo from birth to death.
Today Karayu struggling to maintain their traditional way of life and face difficulties because they are relatively unknown group , both in Ethiopia and abroad .
Source: Aisha Tours, Ethiopia

Uploaded to Ethiopian People — 2 years ago