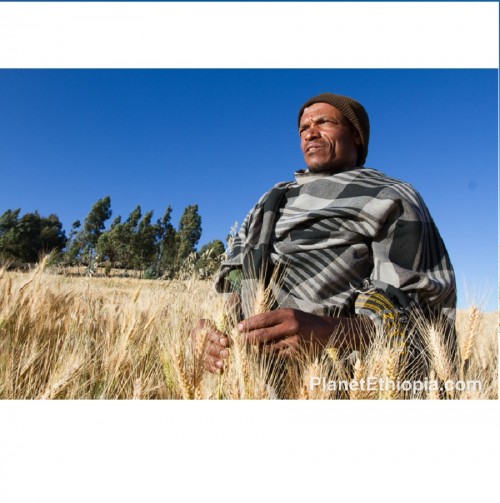 Agriculture in Ethiopia is the foundation of the country's economy, accounting for half of gross domestic product (GDP), 83.9% of exports, and 80% of total employment.

Ethiopia's agriculture is plagued by periodic drought, soil degradation[1] caused by overgrazing, deforestation, high levels of taxation and poor infrastructure (making it difficult and expensive to get goods to market). Yet agriculture is the country's most promising resource. A potential exists for self-sufficiency in grains and for export development in livestock, grains, vegetables, and fruits. As many as 4.6 million people need food assistance annually.

Agriculture accounts for 46.3 percent of the nation's Gross domestic Product (GDP), 83.9 percent of exports, and 80% of the labour force.[2] Many other economic activities depend on agriculture, including marketing, processing, and export of agricultural products. Production is overwhelmingly of a subsistence nature, and a large part of commodity exports are provided by the small agricultural cash-crop sector. Principal crops include coffee, pulses (e.g., beans), oilseeds, cereals, potatoes, sugarcane, and vegetables. Exports are almost entirely agricultural commodities, and coffee is the largest foreign exchange earner. Ethiopia is also Africa's second biggest maize producer.[3] Ethiopia's livestock population is believed to be the largest in Africa, and in 2006/2007 livestock accounted for 10.6% of Ethiopia's export income, with leather and leather products making up 7.5% and live animals 3.1%.
Source: Wikipedia

Uploaded to Ethiopian People — 2 years ago