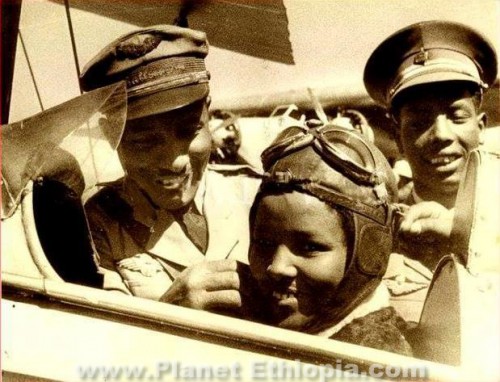 Africa’s first female pilot was Muluemebet Emiru from Ethiopia. Muluemebet started training in 1934 or 1926 (Ethiopian calendar) – completing the course in 1936. Her piloting career though was cut short by the Italian invasion of May 1936.
She was also Ethiopia’s first licensed female driver in 1934.

“I was overwhelmed. It was a tremendous thrill though I did not realize at the time… that I was Africa’s first woman pilot. But with the war, I gave up flying. Indeed I got married.”, the 1980 Selamta, the in-flight magazine of Ethiopian Airlines quotes Muluemebet as saying.
“I would fly several times a week – always over Addis. It was an unusual experience and my friends all envied me.”

Muluemebet trained alongside six other Ethiopian students who trained on a French model and an English Tiger Moth planes. It is believed that its these students who led to the birth of current Ethiopian Airlines.

Uploaded to Ethiopian History — 6 years ago