PE12
Their artistic designs imitate the plumage of birds and the stripes of zebra; the white chalk mixed with water highlights their bodies, and, though it lasts only for one day, is long enough to shine out in ceremonial feasts.
Men, women and children alike all dance. And the rhythm is especially striking in courtship rituals.
The women of this Ethiopian tribe colour their hair with a mixture of animal fat and red clay; they wear brightly coloured necklaces, their arms boast numerous bracelets and they wear leather skirts.
Although the men are always more painted, the women often employ decorative scarring, shallow incisions that, with a coating of ink, acquire a unique touch that attracts the men.
The Karo were originally a tribe of hunter-herders, but they were forced to work the land in order to survive, due to the continuing scourges of tsetse fly which infected their animals and decimated their herd
To the southeast of the River Omo is the territory of the Karo, an ethnic group of barely 1,000 people.
They are constantly under threat: persistent droughts that cause a cycle of famine, a severe pandemic or a simple war with their powerful neighbors the Mursi could lead to their ultimate extinction.
Their customs and ways of life have remained the same for 500 years. 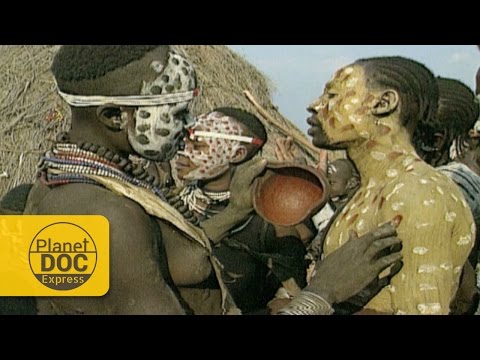 Their artistic designs imitate the plumage of birds and the stripes of zebra; the white chalk mixed with water highlights their bodies, and, though it...