SHOTLIST
Addis Ababa - recent
1. Various minivans and taxis in Addis Ababa
2. Various Tigest Melesa, Taxi driver and customers
3. SOUNDBITE: (Amharic) Tigest Melesa, Taxi Driver
"At first, being a female taxi driver was not always easy, it was tough sometimes because it was a new idea, people were not used to seeing women taxi drivers. Now it's much better though. I only drive during the day so it's much safer and less of a risk. Also, if I have any technical problems with the car - I am confident that I can fix them myself."
4. Various Tigest Melesa and father Melese Kerage
5. SOUNDBITE: (Amharic) Melese Kerage, Tigest Melesa's father
"She was very interested in being a mechanic so I helped her to learn. She was very clever, more than I expected, and certainly better at the job than some of the men."
6. Various Mohamed Yusuf and Tigest Melesa
7. SOUNDBITE: (Amharic) Mohamed Yusuf, Tigest Melesa's customer
"If I see a man or woman driving a taxi I prefer to use a woman, like Tigest, because it is a new thing for us to see women taxi drivers. Women are also more attentive and better than men at driving. Also, it can be dangerous in this city and Tigest really has a lot of courage to do this job and so I want to help her and to encourage her to continue."
8. Various Isabel Fernandes, Tigest Melesa's customer
9. SOUNDBITE: (Portuguese) Isabel Fernandes, Tigest Melesa's customer
"The first few months after arriving in Addis Ababa I used the minibuses to move around the city but I was involved in almost two traffic accidents so I stopped. I was lucky to find Tigest as she's an excellent driver, very punctual and I really enjoy working with her."
10. Various Atsede Guta, Ministry of Women's Affairs
11. SOUNDBITE: (Amharic) Atsede Guta, Ministry of Women's Affairs
"We encourage this female taxi driver to work because we really feel that she is a model to other women. She can encourage them to get a job, as a taxi driver or anything else. She's empowering women and showing them that they can find their own way to generate an income."
12. Various Tigest Melesa changing car tyre
13. SOUNDBITE: (Amharic) Tigest Melesa, Taxi driver
"One day I collected a male customer and he was extremely drunk. When I took him back to his house his wife saw me and assumed that I was his mistress or something. She attacked me and tried to break my car mirror. People jumped in to help me and I tried to explain to his wife that I was just a taxi driver. The woman asked me: "what are you doing with my husband?" She later apologised when she realised she had made a mistake."
14. Various Tigest Melesa at petrol station and waving goodbye
LEAD IN :
Female taxi drivers are rare in any country, and in Ethiopia it's virtually unheard of to have a woman working behind the wheel of a car.
But one Ethiopian lady has well and truly placed herself in the driving seat, and is proving to be a role model to other women.
STORYLINE:
The roads of the Ethiopian capital Addis Ababa are filled with blue taxis and minivans.
Addis Ababa's Transport Authority says there are 17,000 taxis in the city, including the minivans, and it often appears that every other vehicle is a taxi in this city of more than three million people (population source : African Union).
Tigest Melesa is an independent 25-year-old woman who has broken boundaries to become one of the city's few female taxi drivers.
Tigest says at first people were reluctant to use her services but now things are much better.
She says that she only drives during the day, as she feels safer, but that if the car breaks down she is confident of being able to fix it herself.
Tigest's inspiration is her father Melese Kerage, who is a mechanic, who taught her everything she knows about cars. 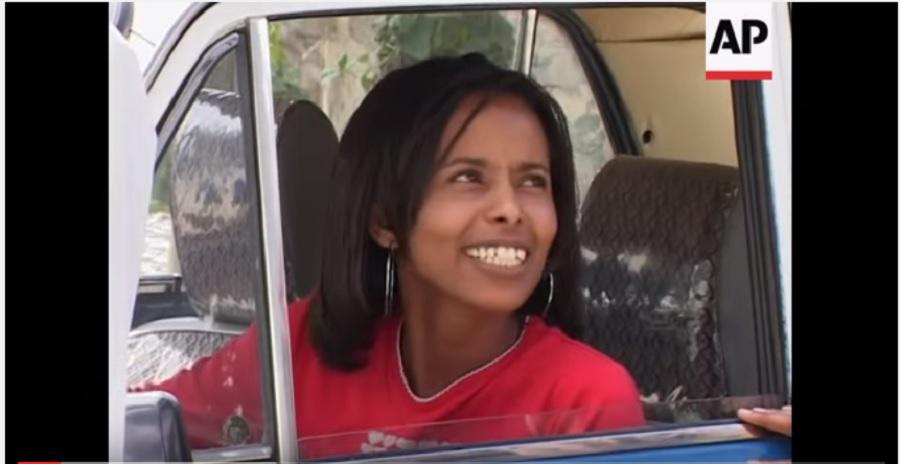