A newly-built community skate park in the heart of Addis Ababa is helping to spread the sport across the Ethiopian capital.
Organisers hope the new location will empower the city's youth and perhaps even cultivate a successful Olympics team for Tokyo 2020.

STORY-LINE:
On the streets of Ethiopian capital, Addis Ababa, Californian Seam Stromsoe is a world away from west coast US.
But wherever there's skateboarding, he's at home.
Five years ago, the photographer began making business trips to the east African country, quickly realising it lacked a skateboarding scene to which he was so accustomed back home.
By 2013, he decided to move to Ethiopia, striking up instant friendships with young, passionate skateboarders on the streets of Addis Ababa.
"Being from California and having seen the impact of skateboarding worldwide and how big it is and what it's become, seeing the kids here and their passion for skateboarding and where they're taking it is really cool because they are really true to the true meaning of skating," he says.
Stromsoe saw the friendships he'd made as a sign, calling on him to spread his beloved sport across the country.
A lot has changed since Stromsoe arrived on Addis' skateboarding scene, there are many more skateboarders roaming the streets.
So the next logical step was this; Addis Skate park.
Covering an area of over 600 square metres, it's the first community skate park built in the heart of Ethiopia's bustling capital.
Before this, keen young skaters only had parking lots in which to practice, says Stromsoe.
"The need for the skate park came from the passion that all these kids have about skateboarding," he says.
"We have been in a parking lot for three years. They were skating every day and every weekend a lot of people, like 40 plus people, meet just to skateboard.
"The parking lot, it is a great meeting place for us, but it is also exposed. There's traffic, there's police - everything that comes with an empty parking lot.
"So the skate park is really necessary so they have a safe and suitable place for it."
At the heart of the Addis Skate park project is a local community group called 'Ethiopia Skate'.
First established in 2013, it's been providing free-of-charge skateboarding gear to around 150 young members.
But now - much to the delight of community leader Dr. Michael Baheru - they have a venue to share with local skate fans too.
Baheru led a successful online crowd-funding campaign which raised $35,000 USD.
He says the park has the potential to change kids' lives.
"I've always wanted to be a medical doctor, ever since I started talking," he says.
"It's my great passion and I'm so happy that I achieved it at this young age and I feel like there's so much to do. Because I want to help people, and this is the best field to be if you want to help people.
"And also with the skating, it is the same phenomena. There's a lot of potential to be able to make a difference in a lot of kids' lives."
After graduating from university, no-one expected Baheru to become involved with local skateboarding, let alone a campaign to build a skate park.
But two years after forming 'Ethiopia Skate', the Addis Skate park has become a reality.
Baheru says Ethiopia Skate is not just about helping children learn how to ride, it's just the beginning.
"Ethiopia Skate is about promoting skateboarding and empowering youth," he says.
"And we want to build as many skateboard parks as possible not only in Addis, but also throughout Ethiopia and promote skateboarding.
"We want many kids to skate. And we want it to be a sport where youth can empower themselves in, believe in themselves.
Two years ago, he returned to his roots and immediately started learning how to skate. 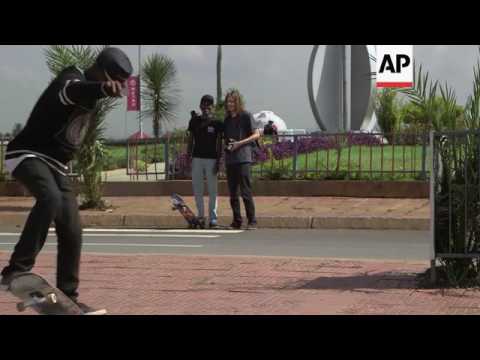